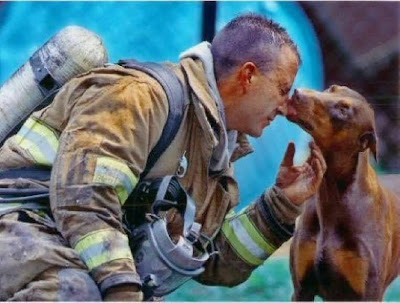 The firefighter in this picture saved this dog from her burning home. The house was in full blaze when he heard her crying and without a second thought, he ran back into the fire to save her. He found her scared and trembling in a corner with flames all around her and he grabbed her up and carried her out of the burning house and onto her front yard and sat her down on the grass. He... then returned to fight the fire.

Now keep in mind, there were many other firefighters on the scene that day, but she was watching only him....his every movement... she didn't once take her eyes off him. The photographer then watched the dog stand up and slowly walk toward the man and wondered what she was going to do.

As he raised his camera to take a photo, he watched the dog slowly walk to the tired firefighter and put her face close to his and kiss him gently, as if to say thank you for saving my life.

The photographer snapped this photograph of the two of them. 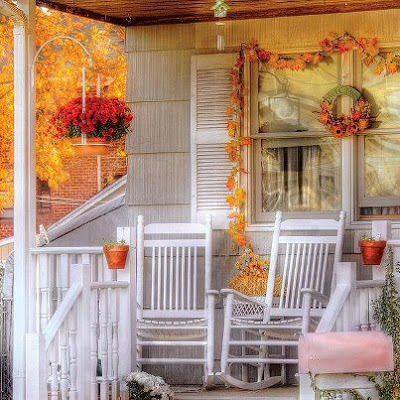 Okay. I confess....I've been holding out on you! This is my favorite of all the Mike Savad pieces...I own this one and it is even more vibrant then in this photo. I also used it as my cover photo last fall when I first started. This is the best of the best...I think. It is the work that introduced me to Mike Savad. A simple photo, enhanced to bring out details and lighting and shadows that make it come alive. Okay...I'm going to play nice and share! 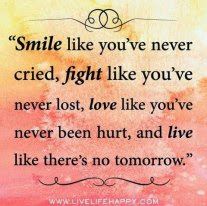 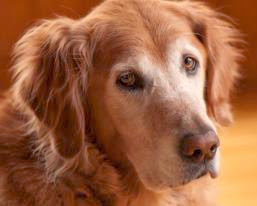 Their joys are simple. A soft bed. A scrap fallen from the table that the younger dogs missed. The memory of a treed squirrel. A stormless night.

Old Dogs…their sweet Buddha bellies hang over crossed legs as they fall asleep in a coveted patch of sun. Dreaming of out-racing their shadows down long, shady lanes.

Once they danced by your side. The very definition of joy unleashed. A perfect poem caught in shining eyes and wagging tails. They have followed you faithfully for years. And would plunge into fires, untamed wildernesses, raging waters if you asked.

Now, they struggle to catch up. Their pace slow but their hearts still valiant. Their cloudy eyes are starting to dim and go distant, tuning in to some invisible world. Just beyond your reach.

Don’t go you say, as you scratch the tender part between their ears. Stay longer. I can’t imagine a world without your fur pressed close to my cheek. There are still so many roads we haven’t explored.

And they look up at you with a wisdom that just slays you.

Their backs are bent, not from the weight of years, but from the invisible wings they are growing that will soon take them to a place where once more they are warriors of speed. Drunk with the sights and scents of a thousand meadows. Able to leap high enough to touch the wing of the tiniest butterfly.

A place where they will now wait for you to catch up. 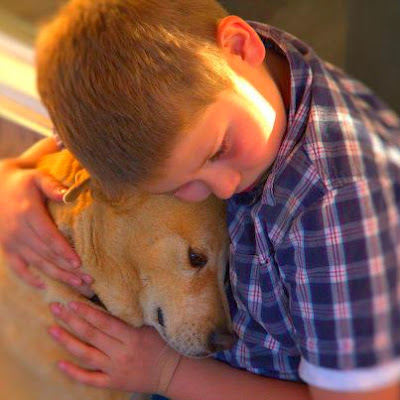 "He is your friend, your partner, your defender, your dog. You are his life, his love, his leader. He will be yours, faithful and true, to the last beat of his heart.  You owe it to him to be worthy of such devotion." 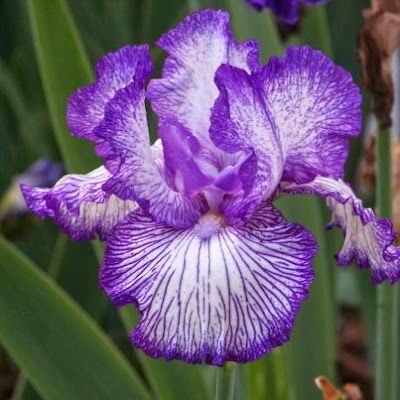 My Mom's Garden...
It's almost magical when bearded irises (also known as Flags) unfurl their pencil-slim buds to reveal a kaleidoscope of color in spring. They come in every imaginable color including solids and mixed colors. The Iris is ...a perennial that comes back year after year and multiplies. They make a beautiful and fragrant cut flower. When I look at the intricate and beautiful details, and the gracefulness of the Iris, I always think, "how could there not be a God."

Anyone can grow the Iris. The photo is of the Tall Bearded Iris called "Circus Circus." Here are a few tips.

Plant them in a sunny spot in late summer. I usually plant mine in late August or early September. The plants need well-drained soil and at least six hours of sunlight per day. A full day of sun is even better to keep the rhizomes dry. (The rhizomes are the fleshy root-like structures at the base of the plant.)

Give them room to breathe. Bearded iris require good air circulation. Plant them a minimum of 16 to 18 inches apart.

Do not mulch. Mulching retains moisture, and too much moisture will cause soft rot of the rhizomes.

Break off seedpods that form after the blooms have faded. This prevents seedlings from choking the surrounding soil. Seed formation also saps energy needed by the rhizomes, roots, and leaves.

Prune back the foliage in the fall. This will reduce the chances of over wintering pests and diseases.

Make dividing a habit. Divide clumps of bearded iris every three to four years in the late summer. Simply dig them up, cut the root ball in half or quarters and replant. 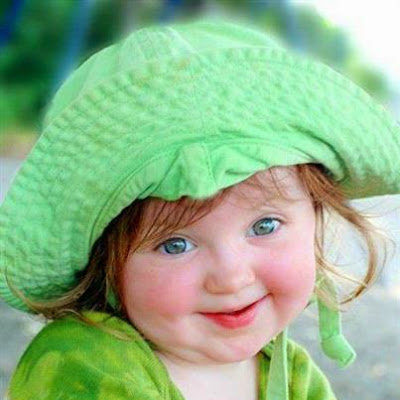 "When someone is rude, keep a smile on your face. When you stay on the high road and keep your joy, you take away their power."
~Joel Osteen 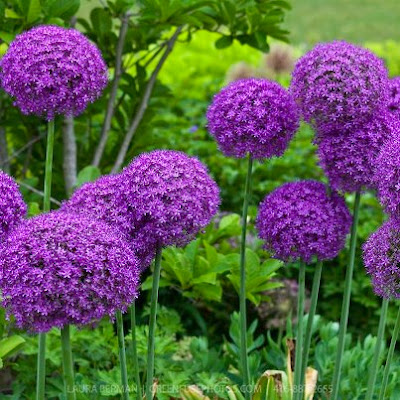 One of my favorite of all flowers in my garden is called the Allium or the Giant Onion. It is a perennial and will bloom every year and comes in beautiful colors. Although alliums are mostly regarded as a vegetable o...r a herb crop, there are species grown for large bright colored flowers too.

Plant the bulbs around late fall or early spring. Prepare flower beds by digging deep and apply peat moss to the hole. Make sure you choose a sunny spot or at least one that receives 4-6 hours of sunlight everyday. Plant the bulbs 4 inches deep in grouping of 4-5 bulbs spacing them about six inches apart, leaving the tip lightly covered in soil. Mulch heavily and water adequately. They will flower mid summer through late summer and in certain conditions even in early fall.

These bulbs do not need much feeding, a single application when the flower buds begin to appear should suffice. There aren't many pests that attack onion, the pungent smell of onion bulb mostly keeps away trouble makers. It is recommended that the bulbs be left undistributed in the ground, and divided every 3-4 years.

Good quality Allium bulbs will result in healthy plants and flowers. I get mine at Costco or at any local nursery. Grow them and enjoy these lovely species of the onion flowers in your garden or as cut flowers.