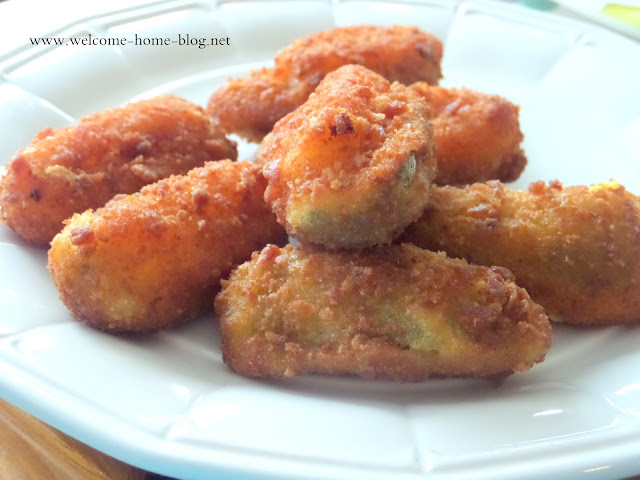 Today is Mexican Food here at Welcome Home and what says Mexican food better than jalapeno peppers!   Jalapeno Poppers to be exact!  I make mine stuffed with cheddar cheese or Monterey Jack and sometimes cream cheese and bacon. Then I bread them and fry them for that perfect crispy bite!  Some people blanch them first; some people bake them first that’s up to you.  If you like a crunch to your peppers, then don’t do either.  But whatever you do, make sure you wear gloves when you make them and keep your hands away from your face!
Jalapeno Poppers
6-8 jalapenos, sliced in half lengthwise, seeds and stems removed
4 ounces cream cheese (room temperature)
½ cup grated cheddar cheese
1/4 cup flour
Salt and pepper to taste
1 large egg, lightly beaten
1/2 cup milk
1 cup panko bread crumbs
oil for frying

Clean your peppers and remove the stems. Slice each pepper down one side and scoop out the core and remove all of the seeds.  You will need to decide whether or not you want to soften them before you stuff and fry them.  If you want a soft pepper on the inside with a crunchy outside, then roast your peppers at in a preheated 450 degree oven until browned on all sides.  Then remove and cool before stuffing them. 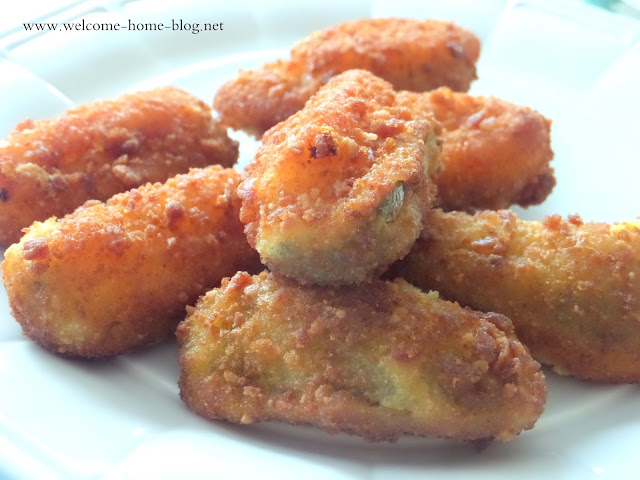 In a medium bowl, mix the cream cheese and cheddar cheese until blended. Stuff each of the peppers with the cheese. Then put the two halves together. The stuffing mixture should hold them together well.

Set up your dredging station with three shallow bowls.  Add salt and pepper to flour. Mix the beaten egg with milk.  Next add the milk to one bowl and the flour and breadcrumbs to the other two.  Dredge the peppers in the seasoned flour, dip them in the egg and milk mixture, and dredge them in the bread crumbs.  I like to repeat this same process a second time so I have a nice thick coating and the cheese doesn’t come out when you fry them. 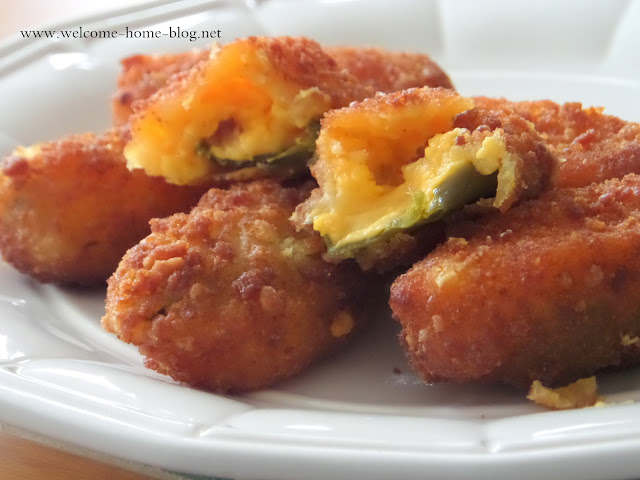 To fry the poppers:  Fill a heavy skillet (I use my cast iron skillet) with about 2-3 inches of oil.  Heat on medium high heat until it reaches a temperature of 350 degrees. Fry just a few peppers at a time until golden brown, about 3 minutes per batch. Using a slotted spoon, remove the peppers to a sheet pan lined with paper.  Continue to fry the peppers, making sure your oil is at the 350 degrees for each batch.

To Bake the poppers:  Preheat the oven to 400 degrees.  Place the stuffed breaded poppers onto a greased sheet pan and bake for 30 minutes or until brown.  Sprinkle with additional salt. 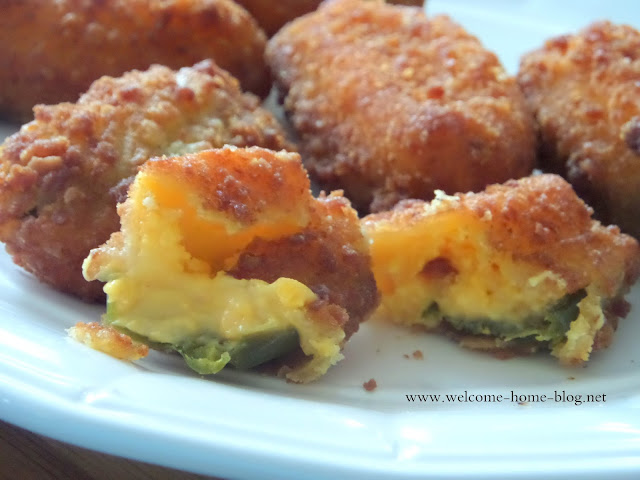 Photography is the property of and copyrighted to ©Welcome Home.
Email ThisBlogThis!Share to TwitterShare to FacebookShare to Pinterest