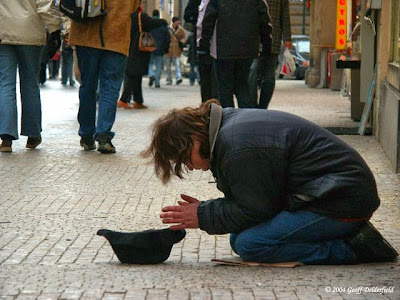 "I Give Not Because I Have Much. I Give Because I Know What it's Like To Have Nothing."

There is a homeless man that walks along a major highway in my town. I have seen him walking that same stretch of highway for more... than 10 years now. He doesn't beg. He just walks along the road with his old torn backpack strapped to one shoulder as the other strap is broken. He is so worn and tired and so cold during the winter months, but he never begs for a thing. I sometimes pull over and hand him a few dollars for a cup of coffee or I buy him a Burger King sandwich or breakfast if I see him during that time of day. I visit him frequently and he has become my friend. Not in the sense that you might think. For you see, he has never spoken to me.

For all the years that I have been visiting him, he has never acknowledged me. He doesn't give any eye contact and he never says a word. I see him walking along that major highway, and I pull over on the shoulder just ahead of him. He continues to walk with his head down. He will not come up to the car window or even stop walking so you have to time your stop just right in order to hand him anything. He keeps his head down at all times and he never speaks.

One day, I saw him walking in front of a gas station while I was pumping gas. Afterwards, I went inside to pay and asked the gas station attendant if he knew anything about the homeless man. He said he did. I asked if he could talk or if he was just shy. His answer broke my heart. He said the man was scared. He said that many years ago he actually did talk to the man and learned just how hard his life really was. He told me that the reason he keeps his head down and will not give you any eye contact is because he lives in fear.

He said there were many times when cars pulled next to him and spit at him or threw bottles at him. He said that one time a car stopped and called him over to give him food. As he stood there, the teenagers inside threw hot scalding coffee in the mans face and then drove off laughing. He has been doused with gasoline and a lit match caught his coat on fire. Another time, he was beaten and robbed of his food and blankets. He said the man has learned to hide his basic essentials under an underpass down the road and he never carries them with him. He no longer stops or speaks to anyone. He is alone and afraid and has no one. But he has me.

I became his friend a long time ago and twice a week I make him up a homemade meal with a jug of lemonade and take it to him. I have to search for him at times but it has become my weekly ritual and just a part of my life.

Last Christmas, I wanted to give my old friend a special present. So, I stopped at the Burger King that he walks past on that same stretch of highway and I bought some gift cards that would last him a while. Then I went next door to Costco and bought a brand new super sized backpack and I filled it with juice packs and some small canned goods like Vienna sausages and Spam. I added some crackers and cookies and some snacks like beef jerky and Slim Jims. I added some hand and foot warmers and 3 pair of heavy wool socks and some warm gloves and a wool cap. I put some chap stick and a pair of sunglasses to protect his eyes. Finally, I put a daily prayer and inspirational book inside along with some magnified reading glasses just in case he needed them. I wrapped the filled backpack in a soft wool blanket and tied a warm winter scarf around it.

I set out last Christmas Eve to find him, and as I drove along the highway I felt such a sense of excitement and joy. It was so cold and windy that day and at first I couldn't find him. I thought maybe he had found shelter from the cold and I looked under the underpass and he wasn't there. But after driving up and down that same stretch of road for about an hour, there he was on the opposite side of the road. I hurried and did a quick U-turn and slowed down the car so that I wouldn't scare him. He walked towards the car staying to the far side of the shoulder, with his head down as if I wasn't there. I rolled down the window and waited as he approached the side of my car.

"Sir, I am not going to hurt you. I will never hurt you. I have seen you walk this road for a long, long time and I am ashamed that I haven't done more for you, but tonight I would like to share the spirit of Christmas and give you this gift of love."

He reached out and took the blanket wrapped gift and just kept on walking. He didn't say a word. He never looked up. He never made eye contact. He just kept on walking with his head down. My eyes filled with tears of both joy and sadness as I sat there and watched him continue his journey from my rear view mirror. And then it happened. As he got a little farther down the road, I watched as he just stopped and fell to his knees with his hands raised in prayer to the heavens above. He lifted his new gift in the air above his head as if to give thanks and glory to God. And then he stood up, turned and looked directly back at my car, nodded his head and continued his journey.

I will leave this world knowing that I may have impacted some lives in my time here on earth, but none like this man who needed so much love on that cold and windy Christmas Eve.

So please give to those who are in need. Please don't judge them or question their motives or think twice about who they are or might be. Just give from the kindness of your heart and know that it could be you one day. And don't make excuses.  I hear so many stories about how people don't give for fear that the person isn't really homeless or that the person will just buy alcohol or drugs. Alcoholism and drug addiction is a deadly and fatal disease and I can assure you that they don't want to be in the situation they are in. They have no choice and without that fix they can have seizures and convulsions and die. But if it makes you feel uncomfortable, then don't give money. Give them food or clothing.

Please give to those who have nothing. It will make such a huge difference in your life and God will truly bless you for helping and sharing your blessings with one of his less unfortunate children.