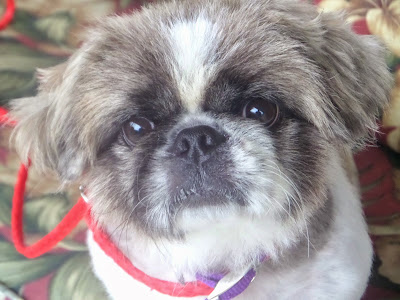 Casey
Hello everyone...meet Casey. He was supposed to die today. But his hopes and dreams of finding a new friend came true this afternoon. I believe every living thing comes into our lives or crosses our path for a reason and it is so well plan...ned in advance. Here is Casey's story.

On the first day of every month for the last year, I have been driving about 40 miles up North to the No Kill Advocacy Group to drop off these big 50 pound bags of dog and cat food along with a check for any of the proceeds that come in from the sale of my books. But I have been feeling a little under the weather for the past few days so I decided to wait until I felt a little better and had more energy to lift all those heavy bags.

Today my brother stopped by to ask if I needed anything while he was out shopping. I told him that it would be most appreciated if he could load those big bags of food and take them to the shelter for me. He said he was going right by there and wouldn't mind doing that for me at all. So he loaded up the bags and I handed him a check for the proceeds from the sale of my new cookbook, made out to them.

These are such good people who are so dedicated to saving the lives of dogs and cats who are put to death while waiting for a friend to come find them. They appreciate whatever you can do to help and so I am always happy to do whatever I can. I was especially eager to present them with this big donation as I had never donated that much before. Those of you who bought my new cookbook made that happen. I usually say hello, hand them the food and the check and stay and chat about all the good things they have done. I never go back to the kennels where the dogs are waiting because I can no longer bear to see them or hear them cry. I always feel happy when I am there and sad when I leave.

I went on about my day and then a few hours later there was a knock at my door. It was my brother who had come to introduce me to his new life long friend Casey. You see the SPCA had picked up Casey after someone spotted him on a 5 lane highway dodging cars. He was scared and hungry and lost. His fur was long and dirty and so matted that he couldn't see. So they cornered him and put him in a cage to transport him back to the kill shelter.

No one claimed Casey. It had been 150 hours and today was the day that his time at the kill shelter was over and his life would end. But that wouldn't be. Because today also just so happened to be that day each month that the NO KILL group goes to the SPCA and rescues dogs that are no longer welcomed there....like Casey. He was the only one scheduled to die today and so they took him back to their facility and gave him a bath and a haircut and all his vaccinations. They checked him out and gave him a clean bill of health and started calling around to find him a foster home.

So in walks my brother....he told them he was there to drop off a check and some food for the dogs and cats. They told him to have a seat and someone would be out to help him unload the bags. He said he heard one of the volunteers on the phone talking about this little dog named Casey and how badly he needed a home. He said he listened for a few seconds and then this overwhelming feeling came over him that said, "stand up and go over to the counter and ask if you can adopt the dog."

He said he began to argue with himself that he already had a dog that he had adopted three years earlier and that he didn't need another one. But he said the conviction was strong and didn't leave. He began to fight with himself and had this hilarious internal dialogue that kept going back and forth. "I don't have the time for two dogs." "Dogs are expensive." "Dogs demand far to much time and energy and I have more than I can handle with one dog."

He stood up and heard himself say, "where is this little dog Casey?" "How long is the adoption process?" "I'm in a hurry but maybe if it wouldn't take too long, I might consider adopting another dog."

They brought Casey out on a leash and he took one look at my brother and broke free to run to him as if he had known him forever. He looked up at my brother as if to say, "where you been?" "What took you so long?" And it was love at first sight. They were meant to be.

My brother brought him straight to my house to tell me what he had done and to introduce me to his new friend. Later he called to tell me that when he carried Casey into his house to introduce him to his other dog, it was an instant friendship and they have played all afternoon until they were exhausted and both snuggled up side by side sound asleep.

The No Kill Shelter decided to waived the adoption process and all the fees in exchange for the chance to save Casey's life. I snapped this picture of this newest member of our family for all of you to see. Click on the photo and feel the love. This was meant to be. It was well planned out and it played out perfectly. Casey was supposed to die today but instead he will be loved more than he could ever imagine for the rest of his life.   Welcome Home Casey. Welcome Home.
Story and photography ©Welcome Home