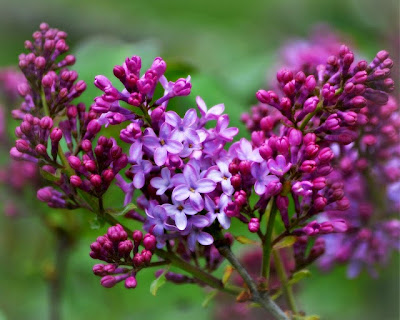 When I was about 7 years old, I remember my Mom chatting with a neighbor over the fence about a bush she was admiring in her yard. The neighbor handed my Mother a tiny stem from the base of that bush and wished her luck.

My Mom was so thrilled and told me that the stem was from a Lilac bush, her mother's favorite of all flowering bushes and that we had to run and find the perfect place for it. So, we got our garden gloves and our diggers and we went to a spot in the front yard where she imagined seeing it one day when she sat on her front porch swing.

We dug the hole carefully and put in the seedling and she carefully put some rocks all around it to protect it from weeds growing close and from my Dad cutting it down with the lawn mower. Then she stood back to admire that little stick in the ground. She said it would be something that we could watch grow together and it would symbolize our love for one another. And it rooted and it began to grow.

And so began the love affair between my Mom and the Lilac Bush. It was slow growing and she tended to it daily. I can remember how excited she was to see the first flower and she cut it and put it on the kitchen table to admire. As years went by, the bush got bigger and she would go out and cut it's sweet, fragrant flowers and make an entire arrangement that would make the house smell so beautiful. She would sit out on her front porch swing and stare at that Lilac bush with such love that you could actually feel it.

It continued to grow. And grow. And grow. That Lilac got to be 20 feet tall and my Dad's biggest nemesis. Many times I would watch him get slapped with branches as he tried to mow the grass around it. He hated that bush and he would come in with scratches and welts where it looked like it had literally attacked him. He was having his own little affair with it and I can assure you it wasn't one of affection. He would threaten to cut it down every time he mowed the grass. My Mom would stand her ground and dare him to touch it. So there were some heated arguments over the Lilac Bush.

Over the next 10 years, it continued to grow to a point where you could not see above it or around it. It was huge and out of place. It had even invaded the neighbors yard and the bottom of the overgrown bush had become scraggly and unsightly with only sticks and branches. But the top half was just abundant with beautiful flowers and the fragrance filled the air to the point of taking your breath away when you first came in the yard. It was beautiful and she loved that bush and the memories of us planting it and what it stood for. We spent many days sitting on that front porch swing admiring the Lilac Bush. All the while my Dad continued to hate it and fight with it and swear that one day it would come down.

Another 10 years or so passed and I went over to visit my Mom one morning. I pulled up to the house and saw her crying on the front porch. Not just teary eyed and shedding a few tears. She had her face in her hands and was sobbing uncontrollably. I had never seen my Mother so heartbroken. I tried to console her but nothing helped. She could only point in the direction of her beloved Lilac bush.

He had finally done it. My Dad, in a fit of anger while mowing the lawn and getting slapped one too many times, took a chainsaw and cut it down all the way to the ground. To him it was just a bush and an eyesore that my Mother was being unreasonable about. I was furious that he could hurt her that way and confronted him head on.

He was in the house, with his head down and with tears in his eyes he tried to explain his wrong doing. He just saw it as a bush and thought she might get a little angry with him, but then she would get over it. He never in a million years thought he would break her heart and it was killing him that he had made her cry. He was sorry he had done what he's done and feared she would never forgive him.

Time went on and she did get over it and he was forgiven. The place where that symbol of my Mother's love for me stood was now bare and the wonderful fragrance was gone. But life goes on.

It really does...because you see, the following Spring, that bush came back. And it came back with a fury. That spring it was 5 foot tall with beautiful leaves and flowers twice the size. The fragrance of Lilacs was back too and my Mother was convinced that it was a symbol of her love for me and that no matter what, it would never die. For three more years we would sit on that front porch swing and laugh about how that old bush probably needed some trimming anyway!

Four years later my Mom moved to heaven. It was in March just before the Lilacs bloomed, so she never got to see how her beautiful her 15 foot Lilac bush had grown and how even more lush and fragrant it was that year.

Well, I take that back. I'm sure she has watched from above every Spring as my Dad goes out each and every morning with tears in his eyes and cuts those flowers, then carries them to the cemetery and painstakingly arranges them on her grave. I am certain she is watching.

It has now become a ritual. Every spring when that bush is in full bloom he takes those fresh Lilac flowers to her daily. He kneels at the grave and cries as he tells her how sorry he was for breaking her heart that day and isn't sure she ever really forgave him. I went with him once and I thought my heart would break as he tries to get out the words about the one time in their 60 years together that he broke her heart.

This morning I went to visit my Mom and there were Lilacs on her grave. And just like old times, I'm sure we were sharing them together. Her love for me has never died and my love for her has grown even stronger.